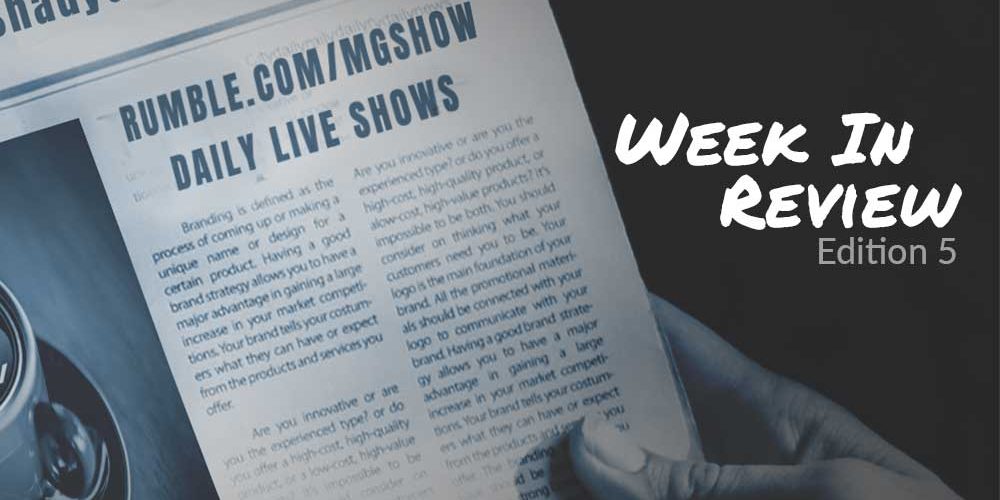 This week has been packed with tons of information, and as usual, the MG Show stepped up to the plate and knocked another one out of the park.

A Conversation with Peter Ticktin

This week has been packed full of information. It started with an exciting interview between Jeff and Shannon and President Trump’s lawyer, Peter Ticktin. He is a lifelong friend of our President, Donald J. Trump. He leads the lawsuit against Hillary Clinton and her cohorts in their Russia, Russia, Russia production. Mr. Ticktin reminded us of their “insurance policy” and how they use legacy media to elicit an emotion from their viewers. No one explained how this works better than Nancy Pelosi herself when she gave us a play-by-play of how they deploy a “wrap-up smear.” Listening to Jeff and Shannon interact with Mr. Ticktin also gave us insight into how President Trump was a natural leader, even in his youth. He interacted with the people around him in a way that made the people not want to let him down, including Mr. Ticktin. I can speak for no one but myself, but this is the position I am in now. I don’t want to let President Trump down, but more importantly, I don’t want to let my country down. If we don’t continue to press forward, we aren’t going to have a country. Jeff and Shannon constantly bring us information every week, highlighting the critical issues we need to pay attention to. They present the facts and leave us to take that information and disseminate it for ourselves. This interview, in particular, touched on three critical issues for me: we are going to see more indictments from Durham, a stolen election would be an actual insurrection, and what may be the most critical statement during the entire interview “we have to win 2022 and 2024.” We have to win these two, and it is up to US. If we don’t, we will be China. Jeff and Shannon have been telling us for months that the person you have been waiting on is YOU. We’re in the fourth quarter with only seconds left in the game; the ball is on the one-yard line. Do we have what it takes to get it over the line?

It was interesting to listen to the guys’ interview with Dr. Kirk Elliott of Sovereign Advisors and his view on how things are playing out in the financial sector. As someone still learning how our economic system has been set up to work against us, he does an excellent job breaking it down in terms the average person can understand. He explains how his company helps patriots take advantage of the trends around us, so they don’t take advantage of us. He also lays out how their proposed efforts to “fix” inflation will not make any difference because the only way to fix inflation is to reflect the actual interest rate. Are they going to do that? I agreed with Dr. Elliott when he told the guys that no politician would do that. We know that Russia is backing their currency with gold and now taking payments in gold also. He talks about Biden creating a new axis power block, his supposed “nuclear option” of taking Russia off of the SWIFT system, and how he de-dollarized the world by doing this. Jeff and Shannon work non-stop to bring you information that is important to you on a national level and a personal level. This interview with Dr. Elliott does just that. Did you know that blockchain is centralized digital money? And I would venture to guess a fair bit of the population does not clearly understand what it is. Dr. Elliott explains how blockchain is entirely transparent, meaning they will be able to see every transaction that happens. They will be able to control your money and everything you do with it. If that doesn’t shake your foundation just a little bit, what will?

Elon Musk and Twitter may be the most interesting story this week. After offering to buy Twitter in a deal worth over 40 billion dollars, Elon stated he invested in Twitter because of its potential to be a free speech platform across the globe. Jeff and Shannon share a theory exploring the possibility of what would happen if Twitter collapses under the weight of the class action lawsuits that have been filed against them? Shannon reminds us that trying to focus on whether Elon Musk is a white hat, gray hat, or black hat is not an important issue at the moment. We need to be focused on what he is doing right now. Remember, the enemy of my enemy is my friend.

The guys discuss Sussman‘s Motion to Dismiss. The court states they cannot resolve this standoff before trial. Motion denied! Sussman is not going to wiggle out of this. Shannon reminds us how important James Baker is in all of this. Did he turn in states evidence? News unlocks the map. How can you not be inspired when Jeff plays a video of President Donald J. Trump stating, “It’s the outsiders who change the world.” “Our best days are yet to come.” The guys go over New York’s Lt. Governor Brian Benjamin‘s resignation following his arrest for campaign finance fraud. Quid pro quo? Who else would be guilty of this? Jeff and Shannon expose the corruption, explicitly showing how foreign money from Arabella Advisors comes into our election processes. They have shown us example after example of the tremendous effort being put forth to prevent us from being successful as a country. The guys remind us that discernment is individual, but the information belongs to everyone. It is essential to operate from a perspective of what you can prove and not get caught up in the never-ending distractions. It is not easy to navigate thru the information world. What do freedom and information mean? The guys remind us that information is not free. It requires your time and effort. Time is a nonrenewable resource, and your action is a personal commitment to that resource. Nothing in life is free.

Jeff and Shannon brought us a compilation of what COVID-19 means to Klaus Schwab and Yuval Noah Harari. If you haven’t seen this episode, it is a must-watch. Schwab talks about the 4th Industrial Revolution, and if you take a genetic entity, for example, what you are doing doesn’t change; it’s who you are that is changed. Harari refers to us as hackable animals. Hackable animals!? Harari says that when people look back, this will be the moment when everything went digital, when we became monotone. The moment we agreed to be surveilled all the time. I disagreed with that. Did you? Is history at a turning point? The guys are bringing you the information; it is time to use your discernment and pay attention to what these people are saying and doing.

We wrap up the week with a history lesson. Are you familiar with the roots of environmentalism and its use as a weapon in the past? Are you familiar with Green Tyranny? Are environmentalism and anti-capitalism two sides of the same coin? These are some great questions. We all have to answer these questions for ourselves. Jeff and Shannon do a great job of providing you with information to look at, understand, and decide what it means. Was Nazi Germany a blueprint of how they could have a globalist planet? I find it very interesting how many similarities there are between what we face today and what happened back then. The guys showed us video clips of President Trump using the word “orange” in place of “origins.” He used the word orange with windmills, NATO, Mueller, and Ukraine. Was he referring to the Orange Revolution? Is orange a reference to the Azov Battalion? Jeff points out how the Olympic torch and 5-rings are rooted in nazi origins. I found it very interesting how environmentalism was born out of nazi ideology. They have weaponized common sense ideas and weaponized your friends and family to defend their doctrine. The guys talk about Deep Dream and show us how Twitter is much more than a social media platform. If you haven’t been focusing on what has been happening with Twitter and its significance, now is the time to pay attention. And last but not least, we watched a clip of how everything you post online is analyzed and potentially sold. Everything? Yes, my friend, ev-ery-thing!

Jeff and Shady are absolutely the news now. Every week, they bring you the facts about what is happening in the world around you. They are helping me and you to navigate thru this information minefield. Every episode is packed full of relevant information you don’t want to miss!