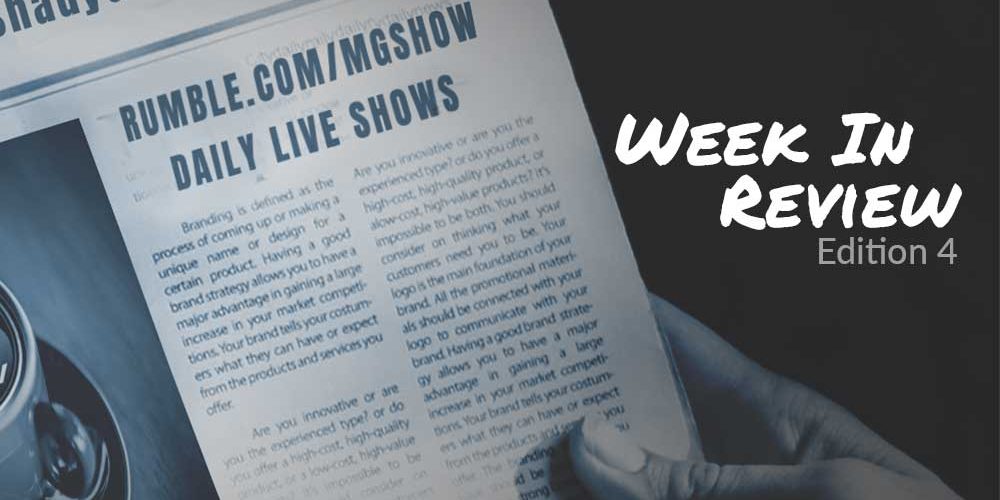 This week has been action-packed with information and true to form the MG Show brought their A-game. Just when you think you’ve watched the best show ever, Jeff and Shannon outdo themselves. Buckle up Patriots and let’s review the news for this week.

Jeff and Shannon started the week off with an overview of our favorite President, Donald J. Trump, and his appearance at the American Freedom Tour in Broward County over the weekend. He was in rare form and once again read “The Snake” poem for the audience. The MG Show was among a few select media outlets at the event that did not include the MSM fake news. They present facts on Volodymyr Zelenskyy to determine whether he is a white hat or black hat. You will have to take the facts presented and decide for yourself. They dig into his background, exposing ties to offshore holdings, PrivatBank, and billionaire oligarch Ihor Kolomoyski. The guys once again go over important information of how Hunter Biden’s laptop is linked to everything we see happening in Ukraine. Why are so many people from the swamp clamoring for war? Why is your Speaker of the House acting like a giddy school girl while greeting President Zelenskyy of Ukraine with “Slava Ukraine?” The guys break down the history of that phrase and how it is connected to the Ukrainian nationalist groups, in particular, a Nazi collaborator Stepan Bandera. We not only have it all but it is all connected.

Months Ahead of the Mainstream News

Jeff and Shannon started shining the light on Arabella Advisors months before the MSM. “We report on it; they have to report it.” Arabella Advisors was brought into the mainstream news cycle during the hearing for Biden’s Supreme Court nominee by Lindsey Graham references them and “dark money.” Arabella Advisors fund groups like Demand Justice and Marc Elias’ North Fund. Demand Justice is the driving force to get Ketanji Brown Jackson elected to the Supreme Court. The guys break down the information of how they move money and fund these organizations to change your election laws. Foreign billionaires are pulling the strings of people like Elie Mystal, aka the “Nutty Professor,” who is out there telling people our Constitution is “definitely not sacred” and “kind of trash.” Let’s not forget that these same foreign billionaires fund Hillary Clinton. Next, they go over an article written in 1992 by our current Resident Joe Biden, “How I Learned to Love the New World Order.” Jeff and Shannon bring out more information on how the Pentagon and the Defense Threat Reduction Agency (DTRA) are behind the Biolabs in Ukraine. “Trump was right” is becoming a common phrase, and the news that President Trump won his case with Stormy Daniels is just another example. And last but not least, the booms keep rolling in as John Durham files a new document concerning Igor Danchenko and the deadline for production of classified discovery. Nothing can stop what is coming.

We Are Two for Two

Once again, on the cutting edge of the news, Jeff and Shannon’s previous report on Metabiota was confirmed by Jack Maxey and Arabella Advisors by Lindsey Graham. That’s 2 for 2, folks! We’ve got Demand Justice funding million-dollar ads to promote the nomination of Ketanji Brown Jackson to the Supreme Court and Metabiota producing biological agents under diplomatic cover. Jeff and Shannon are showing you repeatedly that both sides of the aisle are complicit in the atrocities we are watching unfold not only here at home but on the world stage. They have been shouting from the rooftops, wake up, pay attention, and make sure your voices are being heard. Call your Senators, let them know that you know about the dark money. If you haven’t seen panic, watch the guys recap a report of Joy ”less” Reid as she works hard to push more lies about “Qanon” – whatever that is. The guys evaluate how Ted Cruz eviscerates Ketanji Brown Jackson’s view on sex crimes, pointing out that she views them punitive and unconstitutional. We were reminded we have to engage in saving our country. We have to go from anger to resolve to action. Remember, we are all in this together.

Jeff and Shannon have a great interview with the original Mama Bears. Their story has inspired mamas to stand up for their children against schools overstepping their authority in masking their children. These women are pushing forward with a message of freedom over fear. The MG Show continues to provide you daily with information that powerful foreign billionaires, like Hansjorg Wyss, are funding organizations to change laws in your communities to affect the way you live in America. Don Jr. releases MxM News app on the Apple store. If you don’t have it yet, check it out. We are the news now.

Saving the Best for Last

President Donald J. Trump filed suit against Hillary Clinton, DNC, and many others we talked about over the last five years. Jeff and Shannon go over the complaint about damages and demand of trial by jury. What better way to wrap up an epic week than an interview with Patel Patriot. The guys go over the information in his latest segments on Devolution. Patel Patriot discusses some of the information he has discovered, which only gives more credence to his Devolution theory, such as PrivatBank, Ihor Kolomoyski, and how it links to Burisma. The information linking up between the news reported on the MG Show, and Patel Patriot takes us to the next level in this information war.

There were so many booms this week, and a flood of information brought forward: Dark to Light. The MG Show continues to be a driving force in citizen journalism and advocates for truth.