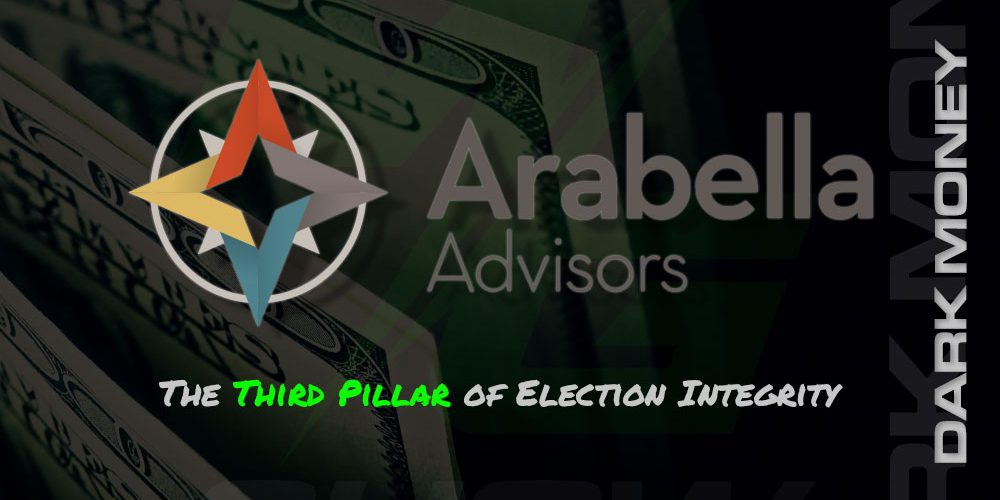 As you know, Q has said, “All assets [F] + [D] being deployed” (Foreign + Domestic) and “They all have foundations & institutes for a reason. Stupid!”

All of us anons have been digging on the individual foundations and institutes; however, we missed the target because there is something much bigger, and it is hiding in plain sight. When I went to St. Louis for Bards Fest, someone took me aside and said you need to dig into Arabella Advisors. I had never heard of them before.

Then I got my shovel out, and what I found was frightening and required to be understood if we were going to fix our elections in America. As Q said, “Important to understand for future events.” I believe this is the Third Pillar of Election Integrity.

The Clinton Foundation is at the center of it with a dark money group called Arabella Advisors. What do I mean when I say that this is the Third Pillar of Election Integrity?

I will go over what I call the First and Second Pillars of Election Integrity to understand this.

The First Pillar of Election Integrity

We have all heard about the electronic voting machines with Dominion, ES&S, GEM, Hart, and SCTYL, but what you may not have heard of is called “Fraction Magic.” I have been following Bev Harris and her work since 2015. Bev and her team uncovered what they call “Fraction Magic.” In 2016, over 5000 subcontractors and intermediaries had access to perform this for any or all clients. It can give contract signing authority to whomever the user chooses. All political power can be converted to the hands of a few anonymous subcontractors. “It’s a product. It’s scalable. It learns its environment and can adjust to any political environment, any demographic. It runs silently, invisibly, and can produce plausible results that pass for the real thing.” Watch the video for context: The Second Pillar of Election Integrity

In the 2020 election, we had a big push for mail-in ballots, which enabled massive ballot harvesting. “How do you ‘extend’ lockdown(s) [economic hardship(s), unemployment, fear, death count, dementia Joe, etc.] in order to paint narrative mail-in voting [when did narrative start (March?_early?_planned?)] needed to ‘save’ lives [+ballot harvesting] in order to generate a future narrative election day +1 which casts doubt as to the legitimacy of POTUS win [Constitutional Crisis][“not all mail-in ballots counted” “how many mail-in ballots lost or did not arrive in key battleground states which could have returned a different result” “we must investigate who cast a vote, but it did not register” “we must go door-to-door if needed [ballot harvest]” “our lives are at stake” “the sky is falling” in order to challenge legally, delay results, enact riots and chaos in an attempt to overturn [coup d’etat].” The deep state would not lose again, so they utilized mail-in voting and censorship and pressed the pedal to the metal. Is this about the virus or hiding what they have done to the American people? The Third Pillar of Election Integrity

Now enter Arabella Advisors. To achieve the third pillar of election integrity, we must purge foreign dark money out of our elections. If we are to understand what the third pillar of election integrity is, we must pose some critical questions. First: Who are the individuals, foundations, and Funds involved in impropriety regarding U.S. Elections? Second: How is it all bankrolled, and by whom?

To answer these questions, we must identify the players involved. This brings us to another question. Who might’ve had the most to lose in past elections?

To answer some of these questions, we must go back in time. The Clinton Foundation is a great place to start. In 1997 the foundation was born. It began as a small organization and evolved into today’s Clinton Machine. The NY Times posted a list of their donors. The who’s-who of the power-hungry elite can be found on the donor list including Canadian John A. Poulos, co-founder of Dominion Voting Systems. Given what we already know about the Clintons and their donors, the Clintons appear to be at the center.

In 2004 Democrats suffered severe losses even with the Clinton Machine full steam ahead. After their vast defeat, George Soros (and possibly Hansjorg Wyss) convened a meeting of the top liberal strategists and progressive donors to conduct an autopsy of what went wrong. From that meeting, they formed a network of donors who committed to funding leaders and institutions that would last well into the future of election cycles. They invested in policy shops, watchdog groups, and training centers—an activist playground. As a result of this meeting, the idea of a new foreign dark money consultancy group was born: Arabella Advisors.

In 2005, Eric Kessler founded a little for-profit consultancy group called Arabella Advisors, which has turned into a $1.7 billion “dark money” behemoth for the democratic party. In 2006, Eric founded a 501(c)(3) called The New Venture Fund, and in 2009, they launched a 501(c)(4) called the Sixteen Thirty Fund.

Stay tuned for the next installment of Arabella Advisors: The Third Pillar of Election Integrity.