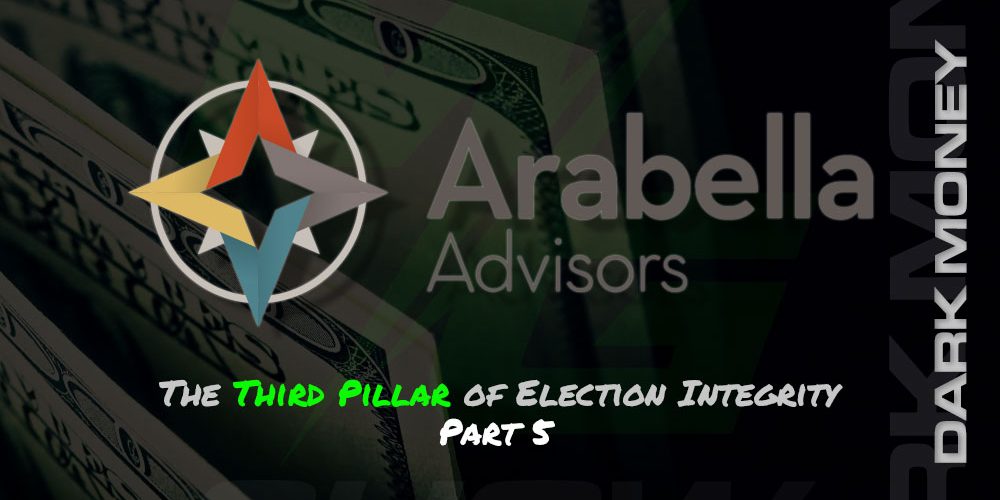 In case you missed it

Welcome to the next installment

The MG Show would like to take a second to say Thank You to all the new readers and, of course our readers who have been with us since the beginning; you have a special place in the MG Show Family.

We work hard to bring you the best content possible. If it is a theory, we label it as such. If it is a fact, it’s a fact whether we like it or not. If you see anything that looks incomplete or have found something new, please contact us by going to our contact page. Who knows, you might even make it on the show if we verify your sauce.

Let’s dig in some more as we bring you the fifth installment of what we call Arabella Advisors: The Third Pillar of Election Integrity. Some big names have specifically called out the Dark Money Network run by for-profit Arabella Advisors and their 5 Non-profit funds, which in turn are  funneled through over 350+ pop-up Foundations.

Jim Jordan was on Fox News and was asked about the SCOTUS pick and drops an Arabella Advisors Bomb.

Dinesh D’Souza was on the MG Show, and Jeffrey Pedersen asked Dinesh about The Third Pillar of Election Integrity, and Dinesh went on to explain that these NGOs and Left-wing non-profits served as vote stash houses and more.

President Donald J. Trump, at the Nebraska Rally on May 1, 2022, and said “no private money pouring into local elections.” This is a Yuge confirmation of the Foundation Decode. In this series, we have only begun to list all who have foundations. These [F]oreign and [D]omestic Billionaires use their foundations to change American election laws. Americans For Public Trust has filed a lawsuit demanding that the Federal Election Commission take action on their complaint against Swiss billionaire Hansjörg Wyss for funneling money into the liberal dark money network led by Eric Kessler’s Arabella Advisors.

“The lawsuit alleges that Wyss used two nonprofit organizations, the Wyss Foundation and the Berger Action Fund, to contribute millions of dollars to the Sixteen Thirty Fund and the New Venture Fund, two so-called dark money groups that fund liberal causes through operations like The Hub Project and Demand Justice.” Reports The Hill The above Statement of Facts in the Americans For Public Trust’s complaint to the Federal Election Committee more than implies that Hansjorg Wyss is not a citizen of the United States of America. In essence, foreign assets deployed and ultimately change our Election Laws. In the FEC complaint, it has been alleged that Hansjorg Wyss’ Hub project is a registered trademark of the New Venture Fund. This now ties [F]oreign dark money to Arabella Advisors. It is known in both the Republican and Democrat Party that Foreign nationals are prohibited from making contributions or expenditures directly or indirectly and the complaint clearly points this out.

However, the most glaring crack in the armor of this elaborate scheme to utilize a foreign national’s funds to indirectly make contributions and expenditures is the admission by Hub Project Executive Director, Arkadi Gerney “that the Hub Project controls a super PAC of its own, Change Now” to run advertisements against Republicans.”

Here is how Mr. Wyss tried to hide his influence and affiliation to his foreign dark money network.

The full FEC complaint filed by Americans For Public Trust can be viewed here:

Here is a summary of the “Causes of Action” charges:

We now know that Hansjörg Wyss is the mastermind behind this foreign dark money Goliath. Let’s tie it all together and gain some insight. Dozens of public and private Foundations are donating to the for-profit Arabella Advisors’ five main Funds. The 501(c)(3) and 501(c)(4) serve as tax shelters to help conceal elite and foreign donors and their dark money. Two of the five funds, New Venture and Sixteen Thirty use one of their 350+ popup organizations disguised as grassroots organizations, hidden in plain sight. These popups can be stood up at the speed it takes to publish a website. They tend to be run as short-term, high-intensity media campaigns targeting the news cycle. As soon as a popup loses its usefulness it is put back on the shelf. This circular economy of sorts is used to finance, influence, lobby, and control our elections.

There are laws that prohibit a foreign national from donating in U.S. Elections, yet here the green card billionaire is influencing our elections. It’s not just Hansjörg Wyss. Arabella Advisors are evasive too. What is that old saying… If you have nothing to hide, then you have no reason to worry.

Americans for Public Trust (APT) watchdog group made an in-person request for nonprofit tax documents Arabella Advisors is legally required to provide. Arabella Advisors staffers who were present at one of their Washington, D.C., offices, refused to provide the watchdog group with copies of the Form 990s and called security to remove the APT representative from the building within five minutes of the watchdog group representatives’ arrival. Just a few weeks prior, Arabella Advisors’ CEO stated they were compliant with all laws. The law required them to hand over these dark money tax returns, and they failed to comply. One might conclude Arabella Advisors are delaying the release of documents that could show how hundreds of millions of dollars were spent to influence public policy and U.S. Elections.

As we reported, on May 14th, 2021, a watchdog group filed a complaint with the Federal Election Commission (FEC) seeking an immediate investigation and enforcement action against Hansjörg Wyss, Wyss Foundation, New Venture Fund, including its trademark “Hub Project”, Sixteen Thirty Fund, and Berger Action Fund (formerly Wyss Action Fund) for violations of the Federal Election Campaign Act (FECA). As a political committee, the Hub Project would be subject to reporting requirements under FECA. The Hub Project is a beneficiary of over $190 million dollars from its financial backer, Mr. Hansjörg Wyss, who contributed through the Wyss Foundation and the Berger Action Fund to Arabella Advisors network of nonprofits. Despite these significant sizeable contributions, the complaint alleges, the Hub Project has failed to properly file the source of the contributions. Therefore, the Commission should find a reason to believe that Mr. Hansjörg Wyss, the Wyss Foundation, the Berger Action Fund, New Venture Fund, Sixteen Thirty Fund, and the Hub Project have violated fundamental compliance and transparency rules with prohibited contributions by a foreign national. We are still waiting on an action report for the complaint in question. This is just the tip of the iceberg. We are only just scratching the surface. We need everyone’s help. “We The People” are the majority. When are we going to have that light bulb moment? We must speak out and be heard to get the foreign assets deployed in our elections removed. The foreign dark money plagues our elections. When are we going to take back our country from a system run by a small group of [F]oreign and [D]omestic billionaires, who want us to remain in this suspended elite-dark-fantasy? The choice is yours to make. Will you stand idly by and watch our republic run into the ground, or will you take a stand and declare your rightful role as an American? Know this, we are with you. ‘We The People’ are with you!

Need to catch up?